We have covered how to set the eDART’s fill volume eDART to get stable Effective Viscosity / Fill. This is the most fundamental number that represents the characteristics of the incoming material. It can vary with the way the polymer was originally made, dryness, temperatures in mold or barrel, filler content, regrind content etc. As one single indicator of the most un-controlled variable, Effective Viscosity / Fill has no equal.

By monitor I mean:

Here are a couple of examples 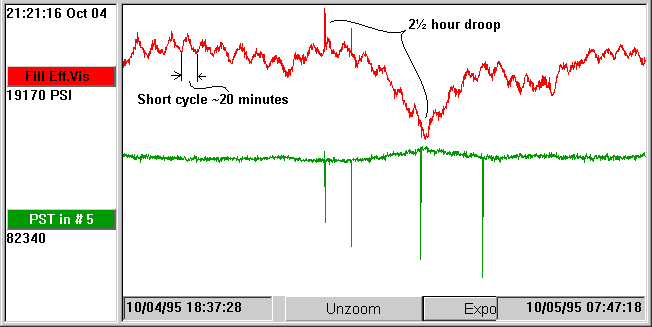 Most of you have seen this one. We have used it for a long time as an example of a few part dropouts in one night. But notice the oscillations in the viscosity all along. Commonly barrel controller PID loops will oscillate at a cycle of a few minutes (1 – 5) if they are poorly tuned. Similarly, mold temperature controllers sometimes do the same. Dryers sometimes show a variation over the drying time (several hours) or when a regeneration bed changes.

This one is 22 minutes. What is causing it?

Addendum from Rod on the 20 minute cycle in viscosity in the first graph: “The 20 minute cycling in this data was found to be the water saver valve on the heat exchanger cycling causing a slight back pressure change over the cycle” 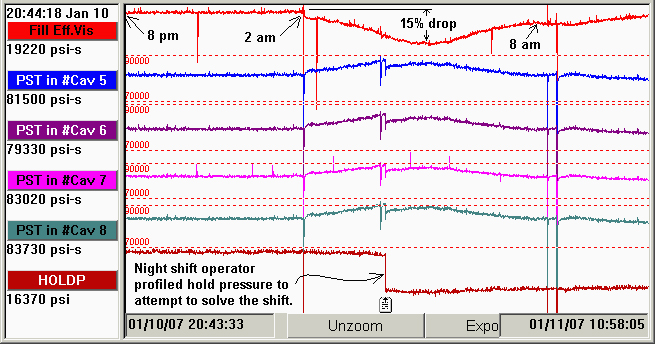 The customer was quite surprised to see how much change happened in a night. Why did this happen? Who knows? It is rather slow for a material change. Those usually show up as a step. And it is not cyclical.

The customer was also quite surprised at the process tampering attempted by the night shift. At least, he said, the were tampering in the right direction to get the process back on track (with alarm lines). 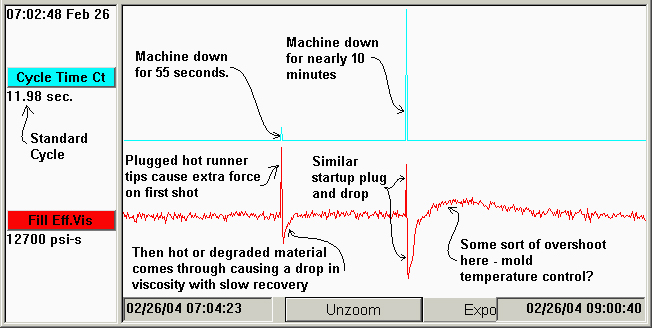 Here’s what can happen when the mold and machine sit idle for a while. The longer the down time (second stoppage), the worse is the shift in viscosity at startup.