In recent weeks we have had some reports of sensor installations not up to standards. Specifically these were cases where the sensor was not supported or loaded on its center line. Like the three-legged stool, sensors will not work if you don’t have symmetrical support behind them.

Using a force (ejector pin) sensor, the pocket holding the sensor was not centered under the pin. This example shows this problem in exaggerated form to make the point. 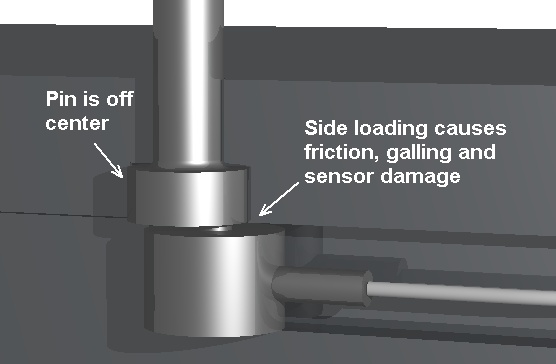 This causes the load to “twist” the front of the sensor creating inaccurate readings and eventual sensor damage. Also having the sensor tilted (non-parallel pocket floor) will cause the load to be off of the center axis.

Here is same example shown with a centered pin: 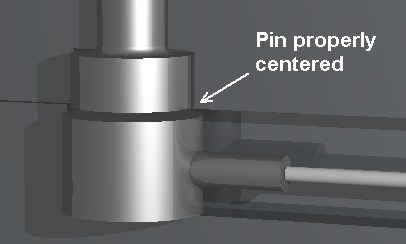 While most customers use the threaded retainer nut sometimes a sleeve is used. In this example  the support sleeve for the sensor was sliced off on one side to make room for some mold component as shown here: 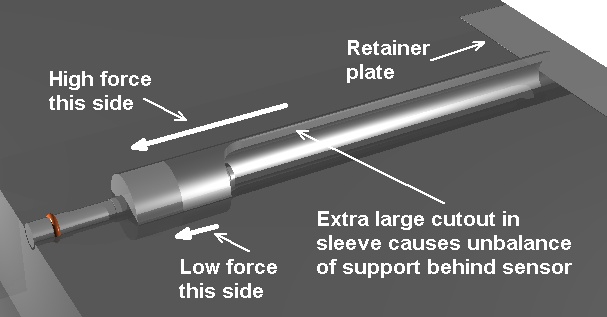 The force on one side caused the sensor to read innacurately.

Here is the same example with the sleeve with the proper small wire slot left at the back.

Always install sensors so that the load is on the center axis of the sensor. Also ensure that the support behind the sensor is symetrical around the center. These requirements are called out on the sensor installation documents.