Tip of the Day 76: Stable vs. Whole Hold Pressure 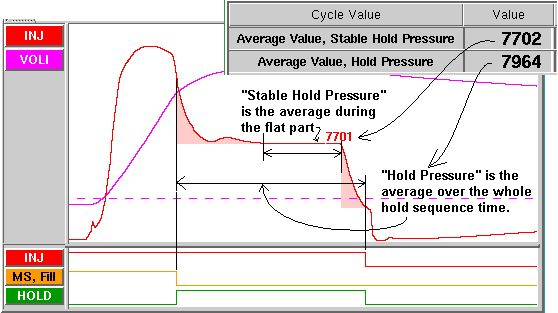 Note that Average Value / Hold Pressure is computed correctly when the fill volume is set.

The two values are not dramatically different. This is because the extra increase in the average value over the slow transition at transfer is somewhat negated by the slowly declining hold pressure slope at the end of hold (the two pink areas). So the average value and stable value are similar. If the pressure dropped quickly at the end of hold the the Average Value / Hold Pressure would be significantly greater than the Average Value / Stable Hold Pressure.

Use this value to study whether someone has set the machine’s hold pressure setting to the proper process setting or not. This value only considers the flat part of the hold pressure curve and ignores droops or oscillations at transfer to hold or at the end of hold.

Use to determine whether the hold pressure as seen by the plastic may differ from machine to machine because of differences in the way the machine transitions to hold. This is not a precise measure of what the plastic sees because of the compression in the runner system. However if Average Value / Hold Pressure differs on the same mold template from one machine to another it should alert you to the fact that you have differently performing machines and may need to make a process adjustment to match between the two.

The graph below shows the difference in the two values if the hold sequence goes off when the machine ends injection earlier. 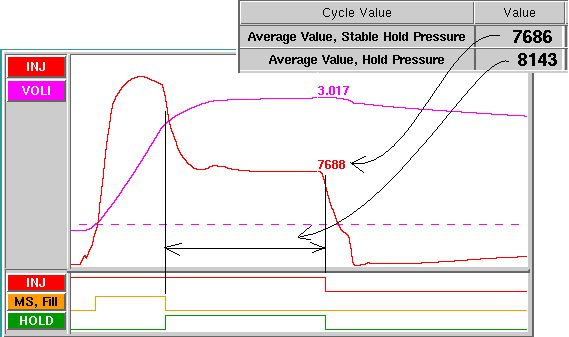