Tip of the Day 69: Multiple Sorting Outputs on the eDART – Part 2

You have several shuttle “bases” or a system that has more cavities in it than the automation has “Zones”. For example consider a 4-cavity mold with 4 sensors in it. The robot has only 2 vacuum circuits that hold the parts from the 4 cavities in pairs. The system must drop two out of the 4 parts if any one of a pair is bad. Thus two sensors have to be assigned to each sorting output.

The eDART can accomplish this using the “Shuttle” software, an optionally purchased software tool. This was built for applications with rotary or shuttle tables in which each mold base has sensors installed. Generally the robot wants to handle only one output for the corresponding cavity, regardless of which base is under the injection unit.

Assign the outputs this way. 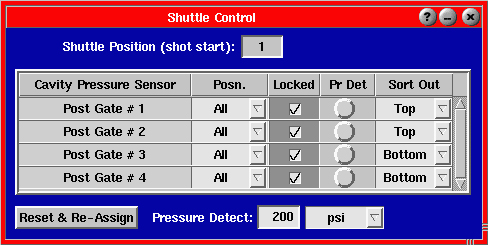 Using the Shuttle Software to Assign Outputs on non-Shuttle Presses

Instead of wiring the assigned Seq. Module Input / Shuttle Position signal to a switch wire it instead to the “Common” on the sequence module. This ensures that it never switches on by accident. Then use the same techniques above to assign certain sensors to certain sorting outputs.

Note that you can ignore the “Position”, “Locked” and “Pressure Detect” columns for non-shuttle applications. In this system the eDART’s internal shuttle works will effectively consider all sensors active all the time because the non-existent shuttle table never moves (being always wired to common).